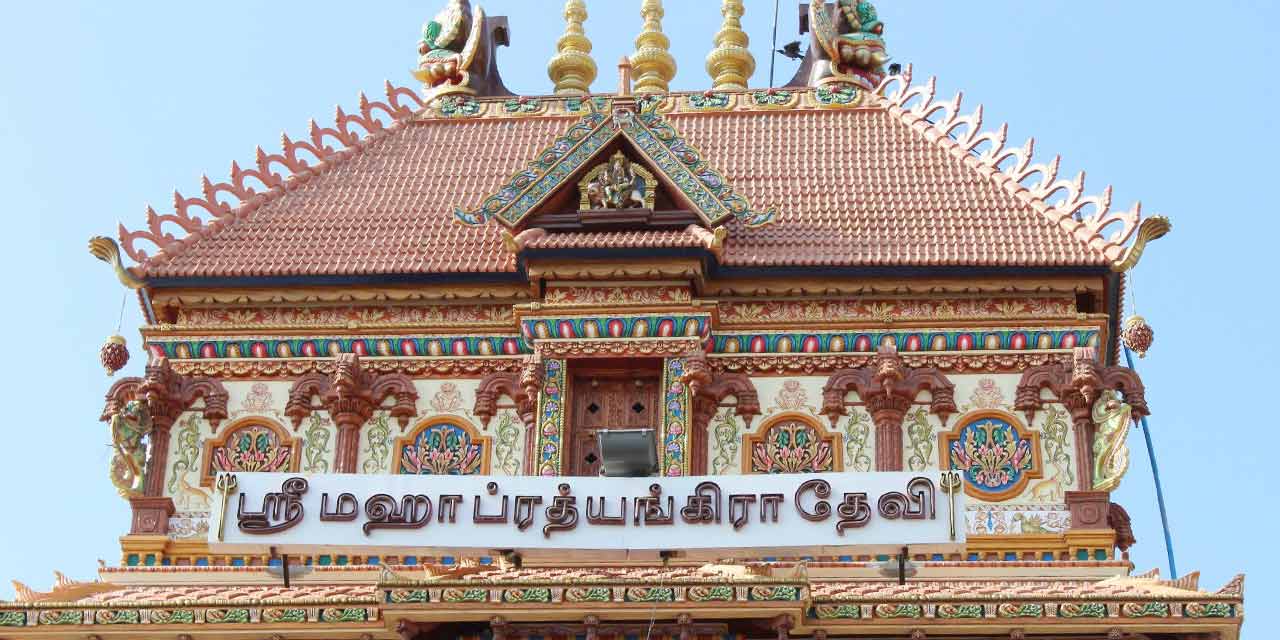 Formerly known as Madras, Chennai is the key economic, educational and cultural centre of South India. It is the fourth most populous urban agglomeration of the country. The bustling capital city of the state exhibits a perfect blend of age-old traditions and the modern culture. A gateway to South India, Chennai is a modern cosmopolitan city.

A city where culture and traditions go hand in hand is visited by several tourists every year. Navigating through the splendid city is going to be an enticing experience introducing the travellers to the rich history, amazing culture and mouth-watering cuisines.

People believe that her blessings bring in solution to all sorts of problems, diseases, curses and obstacles of the devotees. Goddess Prathyangira is a manifestation of Goddess Kali who appears in the lion form to calm Lord Vishnu’s incarnation as Narsimha Avatar.

People will be delighted to learn the legends relating to the temple. It is believed that Prathyangira Devi originated from the third eye of Lord Shiva and took the form of a half human and half lion.

Legends state that all the Gods requested Lord Shiva to pacify the anger of Narsimha Swamy who was in rage after he killed the demon Hriyanyakashyap. Lord Shiva took incarnation as Lord Sarabeeshwara invoking the three shaktis (Parvati, Mahalakshmi and Saraswathi) but he could not fight against Narsimha Swami who took the form of Gandaberunda.

As such Goddess Parvati manifested as Prathyangira and put an end to the fight between Sarabeeshwara and Ganaberunda. It is believed that she possessed the powers of Lord Shiva, Lord Vishnu and Goddess Parvati. There are other mythological stories associated to the Goddess who is also popular as Narsimhi or Narashimika.

Special poojas or worship is offered very often in the auspicious temple. Yagyas or Homams are performed seeking to destroy the influences of evil forces and black magic. Red chillies are offered and hommas are conducted by the priests on every Amavasya or the no moon day and Purnima or full moon day.

Key treasures near Prathyangira Devi Temple include ISKCON Temple and Click Art Museum. Discover the serenity of the small shrine along with the other draws of the city boarding our one day Chennai tour packages or customize your tour.

Chennai is well connected with various parts of the country and the world through all modes of transport of air, road and railway. Chennai International airport is one of the busiest airports in India. It is well linked with other countries through various flights that fly in and out from the Anna terminal. Domestic flights take off from Kamaraj terminal.

It has one of Asia’s largest bus stations. Both private and government bus operators run buses from CMBT (Chennai Mofussil Bus Terminal) that connects the city to other cities of the country. MTC (Metropolitan Transport Corporation) has several buses connecting almost every part of the city.

Local buses, electric trains and metro trains are often the preferred modes of transport for journeys within the city. Prathyangira Devi Temple is situated in Sholinganallur near the Bay of Bengal beach on the banks of Buckingham Canal. It lies just two km away from old Mahabalipuram Road on the link connecting it to the East Coast Road. People can take a taxi, autorickshaw, local bus or private cab to reach the temple from the airport, railway station or bus stand.

Why to visit Prathyangira Devi Temple?

When to visit Prathyangira Devi Temple?

Prathyangira Devi temple can be visited anytime during the year however people prefer visiting Chennai only during the months of November to February as the temperature and humidity is less as compared to the rest of the year.