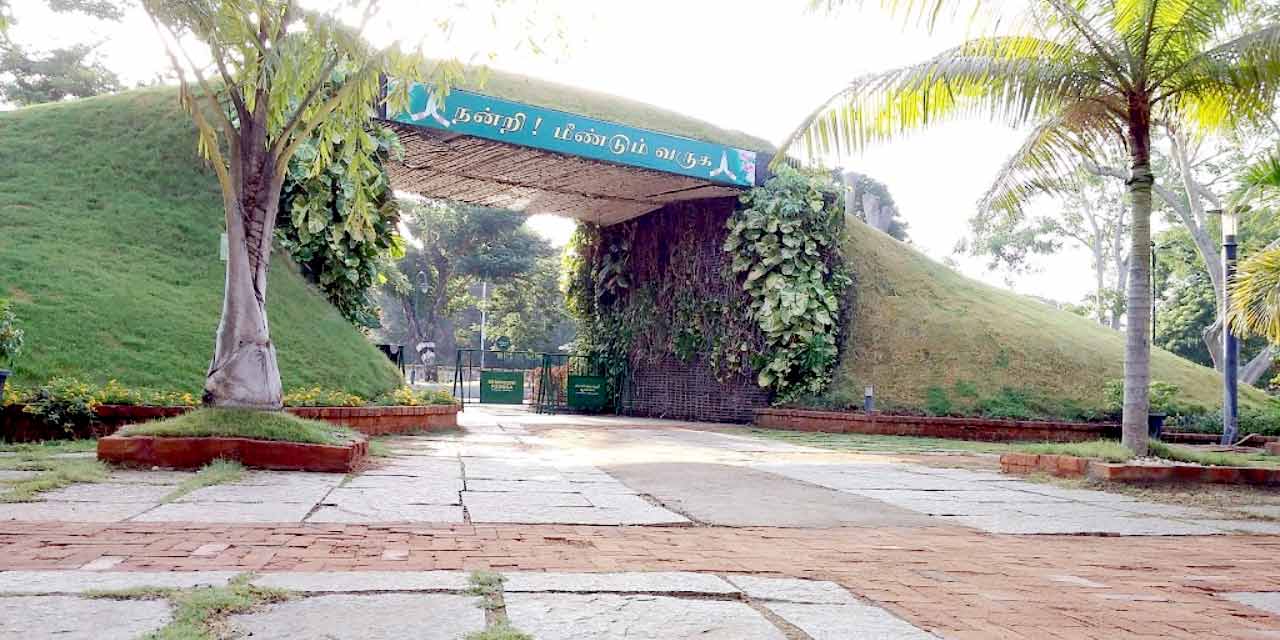 Tantalizing city of Chennai shrouded with rich culture and authentic cuisines pulls a huge crowd of travellers every year to explore the capital city of Tamil Nadu. The key industrial, economical and educational centre of South India is also known as the Detroit of India.

A visit to the natural treasures of any city is always a preferred choice for visitors seeking a respite from the hustle and bustle of the city. Semmozhi Poonga Botanical Garden is a refreshing sightseeing spot of the city which gives the visitors an opportunity to get soaked in its beauty. Admired by enthusiastic botanists it has been a favourite spot for the locals too.

The first botanical garden of the capital city situated in Teynampet holds a good collection of exotic flora and rare plant species, medicinal and aromatic herbs. It attracts huge crowd for morning joggers. It is a desired spot for filmmakers and several film shoots as well as photo shoots take place every week.

Sprawling over an area of 20 acres, the botanical garden is well maintained by the Horticulture and Agricultural Engineering department of the Government of Tamil Nadu.

Semmozhi Poonga which means the Classical Language Park in Tamil was inaugurated by the then Chief Minister Dr. M Karunanidhi on 24 November 2010. Built at an expense of 80 million rupees, the wonderful garden has more than 80 trees since its existence with few of them being more than a hundred years old.

The Agri-Horticultural Society, sub-leased 18-acre land to the hotelier K. Krishna Rau, who established the Woodlands drive-in Hotel in `1962. It was more popular as the Indian Hotel. In 1982, BAPASI held the annual Chennai Book Fair in the hotel premises. In 1989 Tamil Nadu Government moved in for the closure of the restaurant.

The restaurant closed its operation after two decades in 2008 and the High Court handed over the land to the government who then decided to set up a Botanical Garden, a research centre and a green house for developing rare species of medicinal and non-medicinal plants and flowers.

Supreme Court gave the consent to the state government to build the garden in 2009 and the garden was established in 2010 by appointing the consultant named Rajendra Associates.

Spanning over an area of 20 acres, the garden accommodates more than 500 species of plants. The inspiring garden is home to some of the rarest species of plants and houses a vivid collection of plants from China and Thailand.

Visitors would be delighted to see the twenty two feet long and fourteen feet high arch at the entrance which has an inbuilt irrigation and drain system. The beautiful arch is covered with seven thousand plants.

People would be enchanted to see the plants from Canada on the ten feet high wall grown in a poly trace. Noteworthy division of the wonderful place is the butterfly garden which has been built in the shape of butterfly adorned with thirty different species of flowering plants.

Aroma garden, ornamented with plants species like parijatham and pavalamalli is a must-visit. The magnificent garden holds Rs. 800000 worth of plants from China. Flowering cacti with a velvety light pink flower at the top, lucky bamboo, non-flowering cacti with diameters up to about 45 cm and Ficus are the major plants brought from China. It also has twelve varied species of orchids and water lilies from Thailand.

Nature lovers would admire the bonsai varieties of Ficus microcarpa and Ficus ginseng. There are eight major partition of the garden, each being home to different floral varieties. Water and Rock Garden, Butterfly Garden, Fern Garden, Sunken Garden and Theme Garden are the various divisions of the garden that allures every visitor.

Another key attraction is the artificial duck pond and the 90-odd species spiral shaped as well as multi-branched miniature trees. The garden is embellished by around 22 thematic gardens that include herbal, aromatic, maze and cascade. Fountains and a range of swings attract the younger lot.

Get fascinating insights into the culture and history of the city visiting the park and the nearby attractions boarding our one day Chennai local tour package or customize your tour.

Other visitors can visit the park from 10:00 AM in the morning to 7:30 PM in the evening on all days of the week except Tuesdays. People are not allowed to carry plastics and eatables inside the park to ensure the protection of the plants. Parking charges for car is Rs. 40, for two-wheeler it is Rs. 15 and for Big Vehicles it is Rs. 75.

Chennai is accessible through all the means of transportation including air, water and land. Chennai Central and Chennai Egmore are the two major railway stations of the state capital that connects it to the different parts of the country. Trains to the various cities of the state can be boarded from Chennai Egmore while trains to other cities of the country run from Chennai Central.

Domestic airlines operate at the Kamaraj domestic terminal on a daily basis. Anna International Airport at Chennai connects the capital city to the major airports of the world. Chennai Mofussil Bus Terminal or CMBT is one of Asia’s largest bus stations and has several buses connecting various cities to Chennai.

Semmozhi Poonga is beautifully set on the Cathedral Road-Anna Salai opposite American Consulate. The nearby bus stops are Semmozhi Park bus stop, Gemini PH bus stop and DMS bus stop. People can hire a taxi, cab, auto rickshaw or board the local bus to reach the botanical garden from airport, railway station or bus stand.

The celebrated park of the city should be visited for its tranquillity and gain a rejuvenating experience.

This treasured gem of the capital city can be visited anytime during the year. Travellers generally prefer November to February months to visit Chennai in order to avoid the scintillating heat of the city.