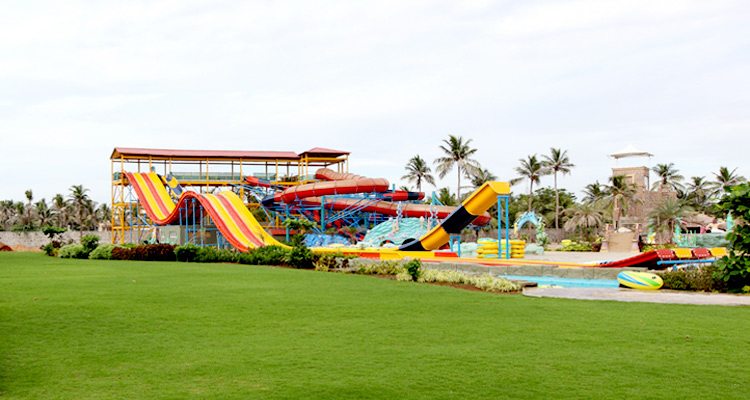 Chennai is a delightful destination embraced for its healthcare, manufacturing and booming IT industries. Authentic and mouth-watering South Indian delicacies, magnificent beaches and rich traditions in art, music as well as dance are some of the offerings of the capital city that allures its visitors.

Set on the Coromandel Coast, Chennai is home to the world's second largest beach named the Marina Beach. The urban metropolis also houses enthralling theme parks for adventure seekers. Children and adults both are drawn to amusement parks for a range of thrilling rides and slides.

VGP Universal Kingdom offers an impressive array of rides and considerably enough space to frolic around. Major attractions include the Snow Kingdom, the Petting Zoo and the Statue Man.

A Statue Man well dressed in the attire of a guard from the Chola Kingdom greets all the visitors at the entrance. He stands unmoved by anyone’s wits or words. It is fun trying to make him move. Have a wild and exciting day with a range of exhilarating rides and attractions at one of the most favourite theme parks in the city.

Initially set to offer few simple rides, the park made its mark as a renowned amusement park in the year 1997. Spanning over an area of forty five acres, the fun-packed park was earlier popular as VGP Golden Beach. Founded by the VGP Company it was renamed as VGP Universal Kingdom in 1997.

Regular maintenance of the rides is done to ensure the safety of the guests. Every ride has a signboard specifying the height restrictions. VGP Universal Kingdom has been honoured with several awards for its excellence in service.

VGP Universal Kingdom features an imposing combination of fifty exhilarating rides suiting the needs of people of all ages.

Visitors would be thrilled as they hop on the fun loaded Ferris Wheel and the Mermaid Ship. While spinning round in the Cup and Saucer add to the fun for the visitors, rides like Tele Combat, Super Trooper and Octopus leaves the visitors mesmerized.

With a seating capacity of 30 people Viking gives an enthralling experience to its passengers. Excitement doubles with ride on the Thrill X and in the Tornado where you feel the twists and turns before plunging into the pool.

Colourful Balloon Racer accommodates maximum 24 people and takes its riders on thrilling spins. People like to bundle themselves in the amazing Dashing Cars as they dash each other competing for the space. Taking a magical whirl as you sit on the wonderful ponies at the Carousel is an enchanting experience.

Adrenaline junkies would love to ride the exhilarating roller coaster that takes them up to a height of 35 feet and gives an opportunity to experience the amazing speed as they come down back to the surface. Thrill seekers would love to take the challenge of holding on to the ferocious London Bull.

Hear screams as people slide down the Aqua Racer and the Float Slide. Water park veterans are sure to enjoy the thrilling twists and turns of the Tornado before they have an incredible splash into the water. Plunging down from a height of 50 feet, the rip-roaring ride of Water Chutti navigates the riders through various tunnels.

Dancing to the tunes of the latest songs under the rain at Rain Dance is an electrifying experience. People would be delighted with the jittery feeling they get as they move into the Typhoon Tunnel or slide down in the Family Raft. Get rejuvenated with the interesting live shows that bring the best artists, dancers, musicians and magicians from various parts of the world.

A plethora of rides designed specifically for the children keeps them engaged and delighted. Boarding the Aladdin as it whirls round is one of the favourite rides of the younger lot. Flying frogs is an alluring ride that takes you up and down on a gentle spin.

A short tour of the park boarding the Tiny Tots Express amuses the tiny tots. Children will also enjoy boarding the colourful Circus Train that accommodates the young passengers in compartments associated with their favourite circus characters like clowns, magicians, acrobats and jugglers. Sitting in Kangaroo’s pouches and spinning round is a charming experience for the kids.

Stay delighted as you watch for the waves crashing along the white sand or take a relaxing stroll along the magnificent shoreline of the Bay of Bengal. Get close with sheep, goats and ponies at the Petting Zoo.

Step back in time exploring the Paneer Fort established in 1990 in honour of the founder of VGP Group of Companies, VG Panneerdas. Look for the exquisite 108 pillars built in the Chola style of architecture that showcases characters from ancient Tamil Literature.

One of the favourite sights at the VGP Universal Kingdom is the Snow Park that gives the opportunity for travellers to get immersed in snow adventures. Kids enjoy sliding down the snow, building snow castles and fighting with snowballs.

VGP Universal Kingdom is endowed with facilities that make the stay of the guests more comfortable and enjoyable. People can avail locker and parking facility at a nominal cost. One locker facility is at the entrance while the other is in the Aqua Kingdom. Swimwear can be rented from the park. Wheelchair is available at the entrance at a cost of Rs.100 for the disabled entrants.

For the convenience of the guests the park has some ATM’s inside the park. Separate changing rooms for both men and women are also available in the park. First Aid is also accessible in the Aqua Kingdom.

There are enough food stalls offering various varieties of mouth watering dishes. Golden Chakra is a multi-cuisine restaurant while the other two restaurants are vegetarian. Sea-through Restaurant and Garden Restaurant are the other two places where you can look out for your favourite cuisines.

To have a full day family thrills and entertainment visit the VGP Universal Kingdom and nearby attractions with our wonderfully crafted one day Chennai tours packages or customize your own tour.

If a group of visitors is more than twenty five in number they can avail the tickets at concessional rates. Tariff for children with the height of 90 cm to 120 cm is Rs. 500 while for adults it is Rs. 600 for Golden Crown ticket which includes access to United Kingdom and Aqua Kingdom.

Tariff for Silver Crown ticket which includes access to only dry rides is Rs. 300 for Children and Rs. 350 for adults.

Tariff for Platinum Crown ticket which includes access to dry rides, water rides and Snow kingdom is Rs. 845 for children and Rs. 945 for adults.

Photography is allowed and the cost for a still camera and a handy cam is Rs. 50. Professional Video Camera can be used at a cost of Rs. 2000. The park is open from 11:00 AM in the morning till 7:30 PM in the evening.

Chennai is well linked with other parts of the country through all means of transport like road, air and land. Chennai Mofussil Bus Terminal spread over an area of 37 acres has several buses connecting different cities to Chennai.

VGP Universal Kingdom is situated on the East Coast Road on the way to Mahabalipuram. A taxi, cab or auto rickshaw can be taken from airport, railway station or the bus stand to reach the amusement park. It lies at a distance of 20 km from the airport and 30 km from the Central Railway Station.

People can also take local buses or electric trains to reach the park. The nearest bus stop is the Injambakkam Bus Stop. Bus No 109 from Parry’s Corner, Bus Route No 599 from Koyambedu bus stand and Bus Route No 19H from T. Nagar stops at the park entrance.

VGP Universal Kingdom is a highly engaging amusement park to have a fun-packed remarkable vacation. It is an ideal way to unravel the magical moments enjoyed at an amusement park.

When to visit VGP Universal Kingdom?

The fascinating place can be enjoyed all year round, however people prefer the months of November to February to visit Chennai in order to avoid the scorching heat of the city.

What are the important things that need attention for visitors?

Ensure that you do not wear loose clothes as it may get entwined causing severe injury. Children must be accompanied with adults all the time. Do not forget to carry your aadhar cards. Avoid carrying food and drinks as it is not permitted inside the park. Smoking is not allowed in the park. Consumption of alcohol, cigarettes and Ghutka is not permitted within the premises of the park.

Can we book the tickets online?

Yes you can book the tickets online.